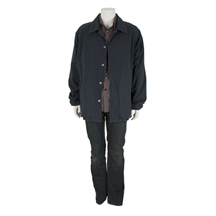 This set of costume wardrobe was worn by “Jack Bauer” (Kiefer Sutherland) in the award winning television series “24”.  This was Jack’s signature outfit that was worn throughout the entirety of Season 5 and also appeared in numerous promotional photos for the series as well as being featured in on the cover of the Season 5 DVD box set and in the book “24: Behind The Scenes”.