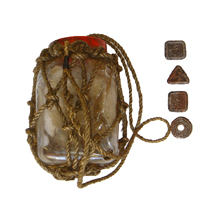 This prop “Dirt Jar” and set of Atoll Currency units were used by “The Mariner” played by Kevin Costner in the 1995 motion picture “Waterworld”. The dirt jar was a key prop from the film and comes with a set of “Atoll Currency” units that were used onscreen during the scene when the Mariner first meets the film’s female lead “Helen” (played by Jean Trippelhorn).