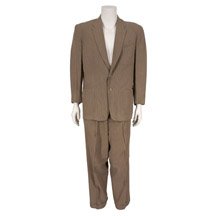 This vintage two-piece suit was worn by the character “Herbert Rossoff” (AKA “Quark”) in the television series “Star Trek: Deep Space 9”. Mr. Shimerman wore this in the episode “Far Beyond The Stars” (Season 6, Episode 13), which was a highly unusual landmark episode in which he performed as a human character without his usual Ferengi alien make up.