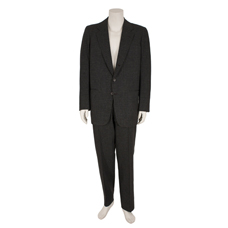 This two-piece suit was worn by “Professor Plum” (Christopher LLoyd) in the 1985 motion picture “Clue”. This was Mr. Lloyd’s signature costume change worn throughout the entirety of the hit film, which featured an all star cast including such comedy legends as Martin Mull, Tim Curry, Eileen Brennan, Michael McKean, and Madeline Kahn. The suit is in excellent screen worn condition and is accompanied by a letter of authenticity.