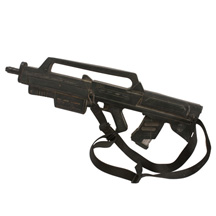 This rubber prop “Morita” firearm was used by the character Johnny Rico (Casper Van Dien) in the film “Starship Troopers”. The actor utilized this weapon in multiple scenes at the climactic ending of the film when Rico rescues Lt. Carmen Ibanez from the lair of the infamous “Brain Bug”. This “Hero” prop weapon was acquired directly from the weapons coordinator that worked on the film and is accompanied by signed certification.