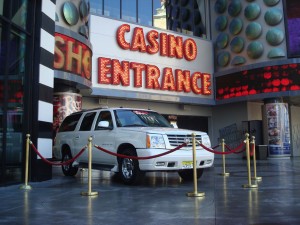 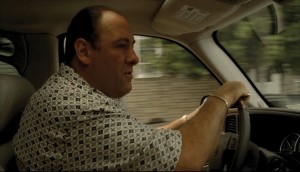 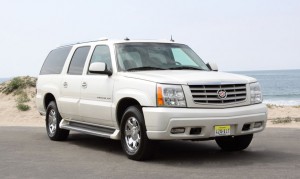 The Golden Closet is pleased to announce the inclusion of their autographed “Tony Soprano” (James Gandolfini) white 2003 Cadillac Escalade ESV from “The Sopranos” in Julien’s Hollywood Legends Auction to be held at Planet Hollywood Resort and Casino in Las Vegas on Saturday June 26th, 2010.

This rare signature vehicle from “The Sopranos” television series was Tony Soprano’s personal car and primary means of transportation as seen throughout the last four seasons of the series. The Escalade was acquired directly from Movie Time Cars Incorporated, the company that leased the vehicle directly to Soprano Productions Inc. and was responsible for all storage, maintenance, and delivery of the vehicles to filming locations during the entire course of production.

Mr. Gandolfini personally autographed both the driver’s side sun visor and passenger’s side dashboard of the vehicle after the production ended on the series. The car will be accompanied by photos of the actor signing the vehicle, as well as a copy of the original lease agreement with Soprano Productions Inc. and a signed certificate of authenticity from the CEO of Movie Time Cars verifying its use on the series.

The car will be auctioned on Saturday, June 26th and is available to bidders by phone, proxy, or in person at the live two-day event to be held at Planet Hollywood Casino and Resort in Las Vegas, Nevada. The Escalade is currently on public display in front of the resort located in the heart of the Las Vegas strip. The vehicle is being offered from the private collection of The Golden Closet, a respected vendor of iconic memorabilia that has been in operation since 1996.

The vehicle has been designated Lot # 1056 and is listed on pages 252 & 253 of Julien’s Hollywood Legends Online Auction Catalogue currently available on their website www.juliensauctions.com, or for more detailed information and images of the vehicle please visit The Golden Closet’s website AT THIS LINK.