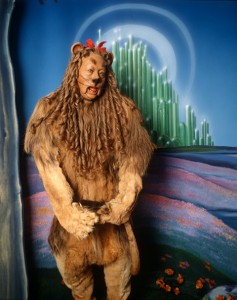 James Comisar, a noted specialist in preserving top-tier cultural materials, supervised the preservation effort: “We knew only the best would be appropriate when caring for an icon as indelible as the Cowardly Lion, so we assembled a team of experts who conserved the costume at the Los Angeles County Museum of Art. Herbert Lahr, the son of actor Bert Lahr, had a strong resemblance to his dad and allowed us to mold his face because the Cowardly Lion’s original foam rubber make-up appliances did not survive.”  Optical-quality glass eyes that capture a faint sparkle of the Yellow Brick Road were also created and metal whiskers and acrylic teeth add further realism to a newly sculpted head; a wig and flowing mane were created using Italian human hair, and thousands of hair strands were painstakingly hand-tied into a Max Factor lace foundation in the same manner used by MGM Studios in the 1930s; and a contemporary pair of the Cowardly Lion’s footwear was meticulously rendered out of lion hide and toned by art conservators to match the screen-used pair. William Stillman, a well-respected Oz historian who has co-authored numerous books on the film, states in a letter that this costume is authentic wardrobe worn by Lahr in The Wizard of Oz, and a full-page photograph of this conserved costume appears in his book, The Wizardry of Oz – The Artistry and Magic of the 1939 MGM Classic.

Designed by the legendary Gilbert Adrian, this costume is constructed out of an African lion skin with unique markings and hair patterns that are as individual as a ﬁngerprint. While it is one of two Lion costumes known to have been made for and used in the production, it is specifically attributed to having been worn by actor Bert Lahr in some of the most memorable scenes of The Wizard of Oz, including when the Cowardly Lion first meets Dorothy on the Yellow Brick Road and sings “If I only had the Nerve” as well as when he later sings his trademark, “If I were King of the Forest” in the Emerald City.

This costume has also been the focus of documentaries produced by The Learning Channel, The History Channel, and has appeared on The Oprah Winfrey Show; and in recent years it has been in the possession of a renowned cultural archive that has maintained it to the highest standards. The Cowardly Lion costume is now presented in front of a painted canvas backdrop of the rolling hillsides that lead up to the Emerald City that was created by Disney artists as a freestanding installation, and the mounted costume and environmental elements are housed in museum-quality shipping crates.  According to the American Film Institute, The Wizard of Oz is the #1 fantasy genre motion picture of all time, and the Cowardly Lion certainly stands as Hollywood’s most regal and enduring icon of courage.